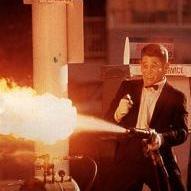 Riya was on RLC for one month. This is Anna's 5th visit to RLC. She has never bated openly as far as I'm aware. Lola's been on RLC for ~9 months. The difference between them and Riya is that we know exactly what we're going to get with Anna and Lola at this point (barring some massive change in attitude) and it's not great. At least with Riya there was a possibility she might get more comfortable with the cameras and do something interesting. There are a number of RLC tenants who have done

i prefer riya 1 millions times than these lola anna amira, lola saw amira making big bucks for months in rlc she tought i coming back to do the same for 9 months. rlc should call back polya to complete the dream team

No reason Monica and the guy couldn't sit on the balcony or in the living room instead of the roof. I wouldn't be shocked if the plan all along wasn't to be 'interrupted' by Amira. It's not like Monica didn't head to the roof repeatedly with guys when she had her own room. And she didn't seem in a hurry to do anything with this guy in the bedroom before Amira arrived. But either way there's absolutely no reason for Amira to still be in B2. She's stopped doing even the bare minimum she was d