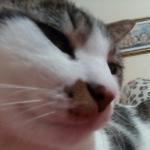 I would venture a guess that many don't interest in European politics. Like many Europeans have no interest in American politics.  Just think if the individual states that make up the United Stat

Yet another megalomaniac German, gives Germans a bad name!